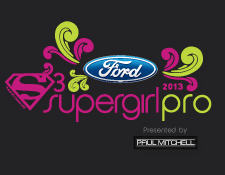 OCEANSIDE, California/USA– The Association of Surfing Professionals (ASP) 6-Star Ford Supergirl Pro presented by Paul Mitchell has officially been confirmed for a second consecutive year, and is scheduled to take place at the Oceanside Pier in Oceanside, CA from August 2-4, 2013.

The Ford Supergirl Pro is the lone women’s ASP qualifying event scheduled in North America this season and provides an excellent opportunity for surfers looking to solidify their position on the 2014 ASP Women’s World Championship Tour (WCT).

ASA Entertainment, the event’s management company, has been producing the Supergirl surfing contest for the past seven years.  The event has has grown from an ASP Pro Junior Series competition into the largest field of women’s surfers at any event in the world.

“We are really excited about the return of the Ford Supergirl Pro in 2013,” said Rick Bratman, CEO of ASA Entertainment.  “We have been supporting women’s surfing for many years, and with tremendous partners like Warner Bros. Consumer Products, Ford and Paul Mitchell, we are expecting 2013 to be the best Supergirl event ever as well as a building block for future women’s events in the U.S.”

The Ford Supergirl Pro presented by Paul Mitchell is the second event of the 2013 Supergirl Jam Series, the action sports industry’s largest all-female competition and lifestyle series, featuring more than 150 female pros in surfing, skateboarding and snowboarding.  The event will be broadcast on Fox Sports Net (FSN) in the fall.